Hello, relatively new user of score here. Not essentially a question, but suggestion about my approach.

While trying to implement my first real score I encountered the following use-case.

My score is split in 3 scenarios. The 2 of them need to play sequentially, and as soon as the 2nd finishes in normal playback in needs to go back to the first. At any time a trigger should redirect execution to the 3rd scenario. Another trigger there should end this scenario and go to first (and repeat as above). For the 3rd scenario I need two options (I haven’t decided yet which one I should follow). The first option is to loop it forever until the trigger is executed. The second option is to let the scenario play until its end except the trigger is executed and then go to the first scenario.

I attach a screenshot on how I implemented part of the above below in a simplistic score file where each scenario includes just an audio track inside. 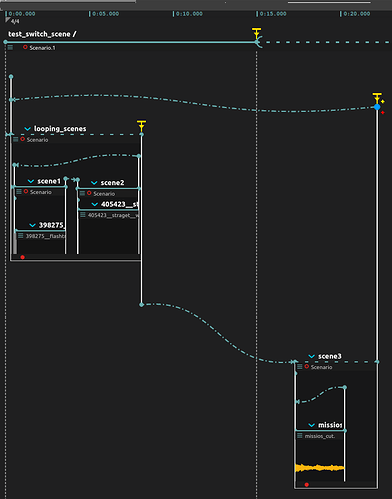 More specifically for the scenes 1+2 I included them in another scenario such that I can apply in that scenario a trigger for going to scene 3. Is this the proper way to do so?

For the 3rd scenario I have a loop back link such that it loops forever and a trigger for stopping this execution. For the alternative option (not shown above) I thought of just eliminating the loop and adding a limit to the “scene3” interval’s duration such that it is stopped as soon as the internal elements finish.

Is there a better approach for anything of the above?

Thank you very much

Hey ! sorry, we’re a bit swamped with conferences and workshops at the moment… @thibaudk you think you can have a look ?

Hi @ggalan87 and welcome !
It seems like you already know your way around it pretty well. I don’t think I would do it any different than you did. These sort of use cases are covered in the common practices.
Well done !

I have a follow-up question.

In the above scenarios sequence I have included many video clips in the first two scenes. The clips are associated with an interval per clip, few seconds each. During the first run they play seamlessly, however when the loop is triggered (scene2->scene1) the videos play from wrong timestamps and the playback is stopped in the middle of the interval before continuing to the next.

Is something that I am missing with timings? In the terminal I can see too many errors with respect to timestamps which I believe this is the source of error. The errors are encountered even in the first loop however.

All video files are .mp4

Sorry again for the late reply.
This does indeed looks like a bug.
If you get the chance, could you report it in details please : 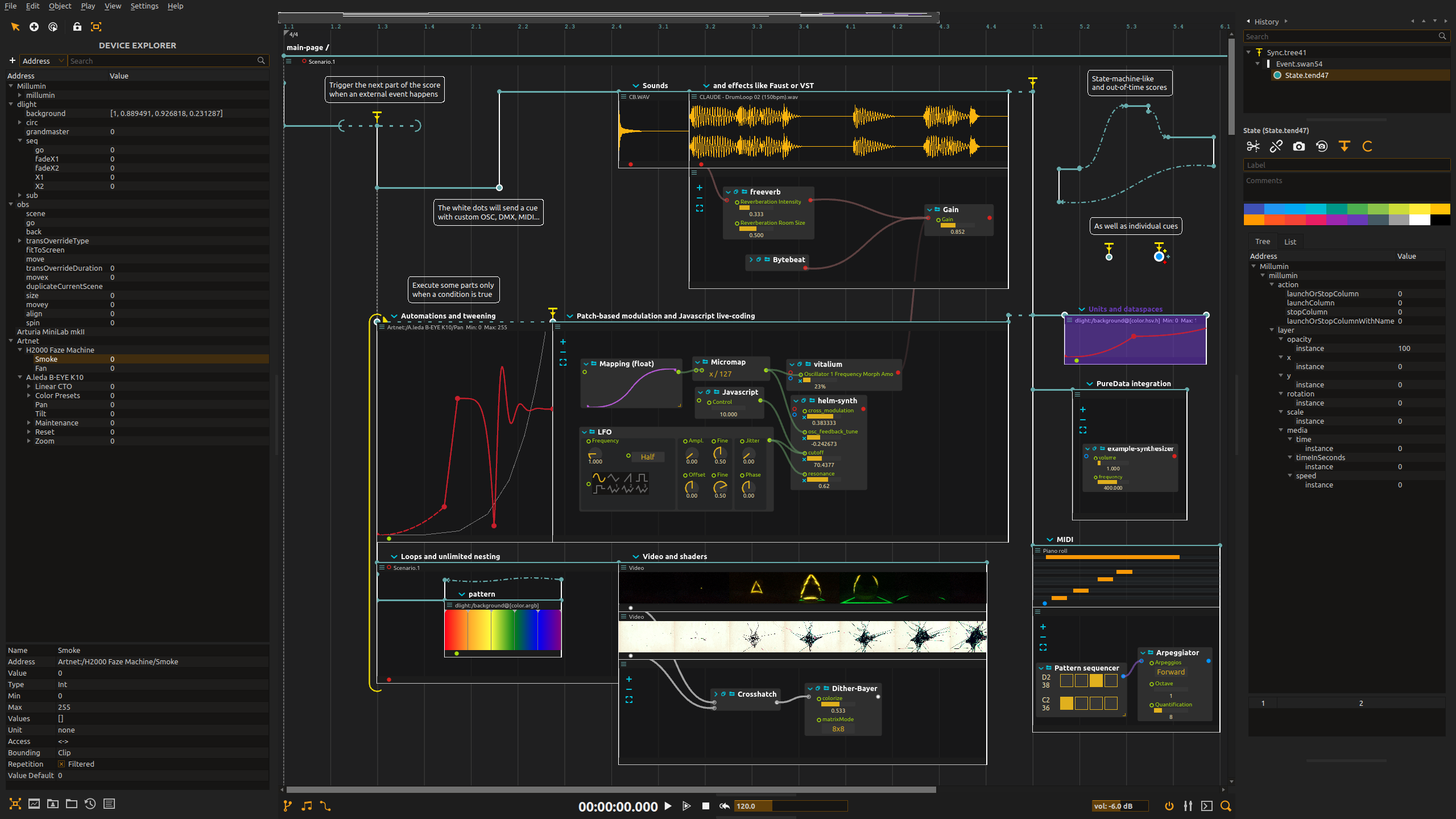 Yes I will definitely report it along with few other things. For example during setting up a version of my score it fell into a completely unusable situation where the file crashes even on startup and had to do it from scratch. I will pack the different score versions I have along with corresponding media files and report the unwanted behavior soon.

For now since I had to setup the score in an installation I just edited the video externally, since it was sequential otherwise.

You can easily convert videos to HAP: Video | score documentation

Hello, I remember from your video tutorial about saying this and I suspected this was the root of error when I encountered the issue, but I found it easier at the time to do the edit externally.

I will convert the videos for the next version of my installation where I plan to do more interactive and/or sophisticated edits and blends.